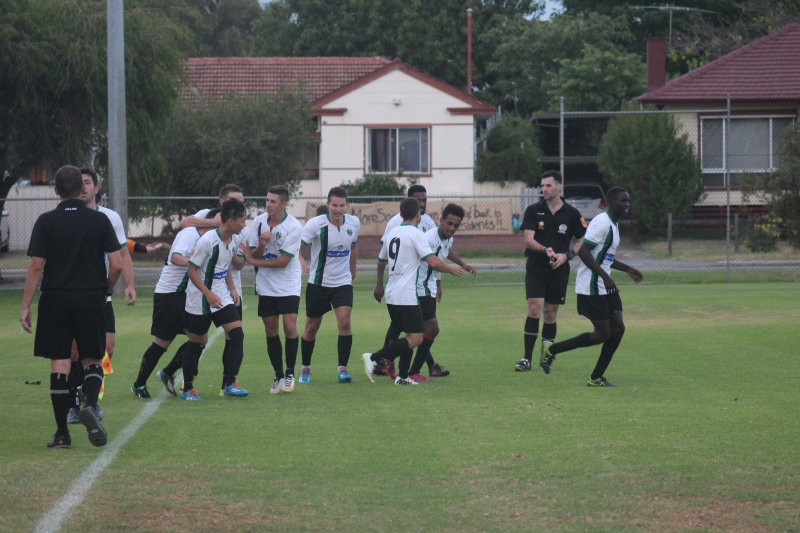 After the third and final round of the Football West Night Series competition group stages, Balga SC top the group and qualify for the quarter finals.

In what was built up as a must win game for Balga, the team from the Northern Suburbs came through with flying colours. The win against a previously undefeated Ashfield placed them on top of the group.

Balga began the game in convincing fashion and with only a few minutes on the clock were ahead. Daniel Nalat finishing a well worked goal down the left flank. Ashfield responded and pulled one back just before the half time whistle.

Balga started the second half the same way they did the first and were ahead once again through a well taken goal by Hubert Hakizimana. They extended their lead further from the penalty spot. Dimce Jimmy Taneski saw his shot saved by the Ashfield keeper but was the quickest to react to make it 3:1 to Balga.

Ashfield continued to press and were rewarded with a well taken free kick from just outside the box with minutes left on the clock. However, their hopes of pulling another goal back were dashed when Taneski once again showed his goal scoring prowess by smashing the ball into the top right hand corner leaving the keeper as a mere spectator. “I was really happy to be on the park again after 6 months out with an injury.” said Jimmy Taneski. “At first I felt a little out of place but slowly got into the game.”

It was a great run into the box by Hermon Habtegergish that Ashfield were unable to deal with without bringing him down and Jimmy Taneski had hist first chance to score. “I normally let the younger team mates take the penalties but Bobby and Amir were adamant I take it this time” he said. “Maybe they counted on the experience in these situations”.

Taneski says he felt the pressure of the moment “I must admit its daunting taking a penalty against Matt Battingelli because we have played together at other football clubs and he is one of the best keepers in the competition, and sure to say he saved the initial kick but couldn’t get to the second shot quick enough”.

Habtegergish was also involved in Taneski’s second goal. His powerful shot bounced off the upright and landed at Taneski’s feet “The ball landed at my feed about six meters away from goal. It was a very crowded box so to see the shot fly into the top right hand corner of the goal was amazing. I was so happy to see it go in. I cant describe the relief on my face after so many months off”. Balga SC head coach Bobby Taneski is full of praise for the players. “I am very proud of the team in the way they approached the game and with players that had limited game time in the first two games” said Taneski. “We managed to perform well and take the lead early on which allowed us to settle, furthermore it allowed us to amend our game plan at half time as we knew we had a fresh and fit players to bring on in the second half. The players must be congratulated as we needed to win and win by 2 goals to top the group. We did our job in quite a convincing style against a team that most likely disrespected our abilities” he said.